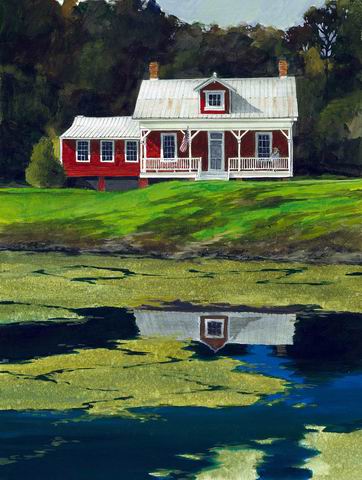 Bloody Point lies at the southern tip of Daufuskie Island and got its colorful name because of several Indian battles that took place there in the early 1700s. Of all the lighthouses along the Carolina and Georgia coasts, the Bloody Point Lighthouse is probably the most ignored and forgotten. Most books I’ve seen don’t even list this lighthouse even though it’s quite unique and worth mentioning. Built in 1883, it was designed as a front range light. Its function was the same as that of the Haig Point Lighthouse at the northern end of the island, meaning that when a ship lined up the front range light with the rear range light, the ship was in the channel. The placement of these range lights was very important in the early days to ensure safe passage into and out of the busy port of Savannah, which is just to the south. John Doyle designed the light and was the first lighthouse keeper, receiving $620 a year for his efforts to keep the light lit and the buildings in order.

One reason that the Bloody Point Lighthouse is often disregarded is because it looks nothing like a lighthouse. The two-story structure is of the same design as the keepers’ houses at Tybee Island. Except for the addition of a large dormer jutting out from the roof of Bloody Point, the buildings are identical. It was a typical-looking, residential structure of its day. The dormer is not what makes this lighthouse unique but rather the use of it. At night the dormer window was opened, exposing a fixed reflector lens that shone in the direction of the other positioning light, transforming this normal-looking house into a lighthouse. There was no need for a Fresnel lens as the light was meant to be viewed from only one direction, and the fixed lens served that purpose. At that time there were no other lights of any consequence except for the lighthouse along this area, so small range lights would not be mistaken for other buildings as might be the case today. Electric lights hadn’t even been invented, so most of the coastline was quite dark. The lighting apparatus has disappeared, but evidence of it remains inside the house with the sheet metal exhaust stack, which vented heat from the light at the top of the dormer, still in place.

Nothing here looks like what we normally think of as a lighthouse. The Bloody Point front range light looked more like a typical house than a lighthouse, and the rear range light was altogether different. It was a steel skeletal tower with only three legs that looked like a large tripod. Under it there stood what was called a wick house. There the lantern was stored and hauled out every evening. Then it was lit and hoisted on rails with a cable up to the dormer, where it burned all night. At daylight it was lowered and put away. The tower is gone now, but the oil house and wick house still remain.

As time passed, erosion ate away at the beach until it became necessary, in 1899, for the front range light (pictured here) to be moved three quarters of a mile inland, with the help of oxen, to the exact spot where the rear range light had stood. History isn’t clear as to whether the dwelling was then used as a rear range light or strictly as a keeper’s house after the move. It is certain that in its place on the beachfront, a new small, portable, steel skeletal light similar to the one at Sapelo Island was erected. This movable light had large, flat, circular steel pads on the bottom so it could actually be dragged to a different location. This needed to be done on occasion to keep the lights lined up with a sometimes shifting channel. Nothing is left of it, and the land where it once stood has washed into the sea.

During the 1950s, the oil house was converted to a small winery by Papy Burn, the last assistant keeper, who lived there for forty years. He fermented bananas, plums, oranges, and anything he could find to make small amounts of wine for his friends. Since then the oil house has been known as “the winery” to everyone on Daufuskie Island.

The northern end of Daufuskie Island is very exclusive and private, but the southern part is more relaxed. The Bloody Point Lighthouse has had several owners over the years and although no  It is still difficult to see this lighthouse because there is no public dock on the island. Even if you get there, the lighthouse is privately owned so it’s not available for public display. The only option is a tour that goes from Hilton Head Island to Daufuskie. Tour companies come and go, so check with the Hilton Head Chamber of Commerce to see if a tour is available.